The articles included on this page have been selected from the Cotton Patch Rag (CPR) or contributed by members of the Houston Folklore & Folk Music Society.

The purpose of the inclusion of these articles is that they may be of continuing interest to the HFMS membership or our followers.

HISTORY OF THE HOUSTON FOLKLORE SOCIETY

We don’t have a lot of information on the founding of our folklore and folk music club.  Our written history consists of two pages from the June, 1966 issue of the ‘News Bulletin of the Society’ and several photocopies of newspaper articles about a 1952 concert.The 1966 issue of the newsletter was Volume 1, No. 1 of would later become the Cotton Patch Rag.  We are now in Volume 49, No. 12 (December, 2014) of that publication so I guess we have completed 48 years of newsletters.  I don't suppose that we have an unbroken string of issues, but it is still a pretty good record.I found an article in that 1961 publication that said the Society was founded in 1951.  I have printed it below. (see link)  I would appreciate receiving any additional in-formation concerning the history of the Society. -       Christine Hartman

During September and October, the Friends of Mandell Park sponsored a weekly "Music at Twilight" concert series on Wednesday evenings in Mandell Park in Montrose. Our Houston Folklore and Music Society was asked to provide a folk music concert on Wednesday 10, 14, so we did! The target time available was one hour, so we went with four performers at 15 minutes each- Carl Brainerd, Gayle Fallon, Jorge Palomarez, and a duet of Paul Cooper and Chris Hartman. The music started about sundown, and it turned out to be a fine, comfortable evening. We got to showcase folk music a little, and also introduced the audience of about 50 people to our organization. Paul brought the sound system that we use at the Second Saturday Concert, which did a fine job projecting the music to the open air crowd. Too bad we were competing with the Astros' final playoff game that evening, or we might have had even more folks come to listen. As it was, it was a fine evening and a good showcase of several styles of music and playing. The listeners seemed to enjoy the program. thanks to the performers, and we'll look forward to a possible repeat at some future date. 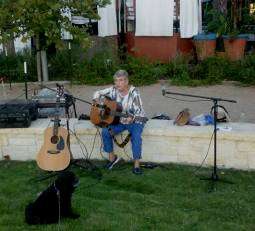 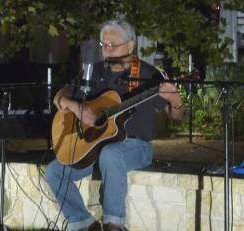 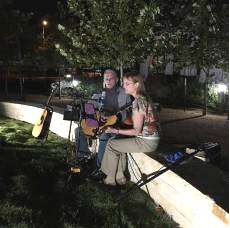 MONROE MANDOLIN CAMP   (from Sept 2014 CPR)
The Monroe Mandolin Camp, directed by Mike Compton, is a 3 day, hands-on musical educational  event held just WEST of Nashville September 4-7. The mission of the Monroe Mandolin Camp is simple…to further the legacy left by the Father of Bluegrass Music, Bill Monroe. The goals for the camp are:
> to preserve the music created and recorded by Bill Monroe;
> to educate contemporary mandolin enthusiasts about the stylistic elements and backbone of this
art form;
> to present a curriculum that allows the players to come away with an understanding of the culture that created the music, and the techniques needed to apply this knowledge to their own musical endeavors.
Ability Level: All musical levels are taught at this camp, and Mike Compton has designed the class schedule to be inclusive of everyone. There will be slow jams (See Camp Song List under Camp Experience for a list of tunes and keys) to help you hone your repertoire. Classes will range from beginner to advanced levels, and individual instructor tutorials will be made available so you can have some one-on-one time with your favorite instructor. For more information see:  http://monroemandolincamp.com/


When I first looked at a guitar, I wondered why the frets were unequally spaced.  Alas I was very young, and there were no personal computers or googling.  While researching the building of ‘cigar box’ instruments, I noticed that some of the makers of these were putting frets on their simple one and two strings instruments.   I looked out on the web and found the ‘Rule of 18’. While called ‘18’ the divisor constant is actually 17.817.   I will not attempt to comment on the derivation, but the computation is straight forward.   For a given scale length (nut to bridge), divide it by 17.817 for the distance to the first fret.  Next, subtract this distance from the scale length and repeat the division by 17.817 for the distance, nut to fret, of the second fret.  I have placed an excel file on our website that will do these calculations for you.  Also, I found a table of constants published by the experts so you can check my method. Note, in the excel file, the scale length, entry in cell ‘C2’ is the only input parameter.  All other values will vary in accordance with this value.
See:  FRET CALCULATOR   and go to the bottom of the page for the ‘Fret Spacing’ link.

A three-day acoustic music school and jam session for guitar, banjo, mountain dulcimer, fiddle, mandolin, bass, and voice will be held in Kerrville from Friday, January 10 (10 AM) to Sunday, January 12 (3:30 PM). The Camp is taught by professional musicians who are also outstanding teachers. This year the Hard Road Trio of Steve Smith, Chris Sanders and Ann Luna will also be leading jam sessions that allow students to work and play with the Hard Road band. The morning sessions are devoted to instrument specific classes and the afternoon classes are formal jam classes (different instruments, similar skill levels) led by the instructors where one can work on the techniques of playing with other instruments. The evenings are filled with informal playing and jams on campus. Lodging and RV spaces are available on campus. Kerrville has motels within 1 mile of campus. For more information and registration see www.hcamp.org. Phone: 830-895-5700.  Email: rbm@hcamp.org.


So What Is DADGAD?  (from May 2014 CPR)
Last month Paul Cooper sponsored a DADGAD workshop in his home given by Hans York. DADGAD is the note assignment to an open guitar tuning, and Hans York, among other things, is a master of this style of playing. There were eleven participants who were spellbound by Hans’s teaching style. He taught us the basic chords of this tuning, and he led us through exercises with these. Moreover, he spoke philosophically of his ideas on playing music and accompanying others. For example, he spoke at length about his approach to ending a song. Also, he played a number of songs for us which demonstrated his techniques. A few days later, he distributed a document through email which documented a generous amount of chords which one can use to pursue this style. This document will be a part of a book he is writing. For more about Hans York you can look at: Hans York . com .

Scientists in Germany have published details of flutes dating back to the time that modern humans began colonizing Europe, 35,000 years ago.

The flutes are the oldest musical instruments found to date. The researchers say in the Journal Nature that music was widespread in pre-historic times. Music, they suggest, may have been one of a

suite of behaviours displayed by our own species which helped give them an edge over the Neanderthals. The team from Tubingen University have published details of three flutes found in the Hohle Fels cavern in southwest Germany. The cavern is already well known as a site for signs of early human efforts; in May, members of the same team unveiled a Hohle Fels find that could be the world's oldest Venus figure. The most well-preserved of the flutes is made from a vulture's wing bone, measuring 20cm long with five finger holes and two "V"-shaped notches on one end of the instrument into which the researchers assume the player blew. The archaeologists also found fragments of two other flutes carved from ivory that they believe was taken from the tusks of mammoths.
http://news.bbc.co.uk/2/hi/science/nature/8117915.stm


Legends Never Die, They Get Shot. The Legend of Blaze Foley

Blaze Foley was a unique character - a transient, homeless musician who frequented the 70s & 80s Austin Folk/Country scene as a fan of the music and as a self taught musician. His adulthood consisted of living in a tree house at one point as well as couch surfing and lots of traveling to Atlanta, Alabama, but mostly Texas. He was jobless and homeless, free spirit whose lyrics were earnest and with good reason, stood up for the underdog and disenfranchised. Blaze was known for his heartfelt songs and brazen attitude toward political issues, personal relationships and his views on fame and the music industry. He had brushes with fame and success in his career. This was all a part of a life which consisted of many ups and downs and which ended when Blaze was shot in a friend's living room on February of 1989. Although he is virtually unknown he managed to capture the attention of musicians who respected his songwriting skills and the heart and sentiment behind them. Willie Nelson, Townes Van Zandt, Merle Haggard, John Prine, Kings of Leon and Lyle Lovett have all sang a Blaze Foley tune in their career. Longtime friend, Lucinda Williams wrote her song, "Drunken Angel" in his memory.

If I could only fly: https://www.youtube.com/watch?v=BMT76_mYDV0